4.4 from 1972 abed had built 5.1 metavillage  15000 homes for 100000 refugees which became a lab for designing livelihood microfranchises for poorest village mothers so they could make positive income while urgently saving the community - eg 2.1 rice production to end starvation; action-learning of basic infant health services to stop children from dying before age of 5 -most did when bangladesh's new and 8th most populous nation was founded -due to being the world's poorest nation, 90% without access to electricity, in the tropics

29 years later when abed opened a university, one question to ask : what could the university invent that would change world of billion poorest mothers? the university as a collab for innovation is potentially totally different than a metavillage of 100000 people living without electricity - the village space that the first 25 years of abed's 50 years of linking partners to end poverty

one idea may sound counter-intuitive for such a higher ed platfor,- early childhood playschools ECP- brac university became the first university in the world to offer an ecp masters; the result ecp became a 2010s movement - the world bank now claims 50 nations experimenting with this  https://blogs.worldbank.org/education/world-bank-s-unwavering-commitment-early-childhood-education  https://thedocs.worldbank.org/en/doc/964641554906838005-0090022019/original/ELPECEbriefV9PRINT.pdf

whilst not every nation may design ecp the way abed does; everyone who gets involved with ecp's global movement knows abed's local advice- design playschool in which children see teacher lovers them - that's how children first learn most at school

it helps that lego has become a huge corporate sponsor; and the yidan prize was awarded to abed for ecp but has since be inspired by him to start a luminaries council- where every different jigsaw piece of education where children are loved is discussed across disciplines age groups between those wizards in edutech (yidan co-founded china's largest tech company tencent0 and those teachers whose love is experienced every second at school

https://www.legoideaconference.com › lego-prize › sir-...
The LEGO Idea Conference 2021 More information to come. Sir Fazle Hasan Abed. Winner 2018. Awarded for his tireless efforts to positively impact the lives of ...
Posted by chris macrae at 7:47 AM No comments:

BRAC University on 25 May, 2022 announced its partnership with the U.S. Embassy in Dhaka on the resumption of the U.S. Fulbright program in Bangladesh after six-years. The university also made public its collaboration in launching an “Academy for Women Entrepreneurs (AWE)”, a Department of State global initiative to promote small and medium enterprises (SME), foster local women entrepreneurs, especially from underprivileged backgrounds, and overall promote gender equality and equity.

The Fulbright program is one of United States’ flagship exchange programs that strengthens and expands people-to-people ties and educational linkages between the United States and Bangladesh. More than 4,000 State Department Exchange program alumni, including 650 Bangladeshis, travelled to the United States under the Fulbright exchange programs and more than 250 Americans have conducted research and/or taught in Bangladesh. The Women Empowerment Center of BRAC University’s BBS is hosting Dr. Sharon Hart, the first Fulbright Specialist. She will be staying for six weeks helping to develop a curriculum for women entrepreneurship and leadership training, design research questions on gender and women economic empowerment issues and build the capacity to conduct workshops for researchers and the BBS faculty members.

The AWE program gives enterprising women the knowledge, networks and access they need to launch and scale successful businesses. This is the first time a Bangladeshi university will be conducting such a program through which 50 women entrepreneurs will have access to mentorship opportunity with successful business owners as trainees to understand the practical challenges on the ground. This AWE project directly supports the U.S. National Strategy on Gender Equity and Equality.

Dr Sang Lee said the joint efforts would have long-lasting snowballing effects to solidify commitments for quality education. He said Dr Sharon Hart had already started contributing through the establishment of the Women Empowerment Centre at the BBS. The centre would work on upskilling and reskilling women entrepreneurs and leaders in Bangladesh with support of corporate partners and evidence-based research on best practices, he added. He said the AWE program would be run at the CED.

private university in a steering committee on the fourth industrial revolution of Bangladesh, said Professor Chang. “At international conferences, people always ask ‘What is your secret sauce?’. I say we do not have secret sauce. We simply did the right thing,” said the Vice-Chancellor. Professor Chang informed the university’s resilient response to Covid-19 and its growth even in this challenging time.

BRAC University champions excellence in higher education and recognizes the pivotal role the entrepreneurs play in creating not only a robust economy and adjust an inclusive society but collaborations among entrepreneurs of difference countries, deepen understanding among people and build ties among nations, said Tamara Hasan Abed. The inclusion of women entrepreneurs, especially small-enterprise owning women and grassroots women entrepreneurs, in the mainstream economy faces many challenges. World-class training programs create new hopes, bolstering their confidence and showing the way. To that end the AWE program will immensely benefit its target audience with BRAC University as the collaborating partner, she said.

Peter Haas said Bangladesh was going to become a middle-income country in a couple of years and the role of women in economic empowerment is very important. Therefore, it makes it all the more special to resume the Fulbright Program.

Posted by chris macrae at 1:43 PM No comments:

...and as for 2020 here is part of vincent's orientation speech 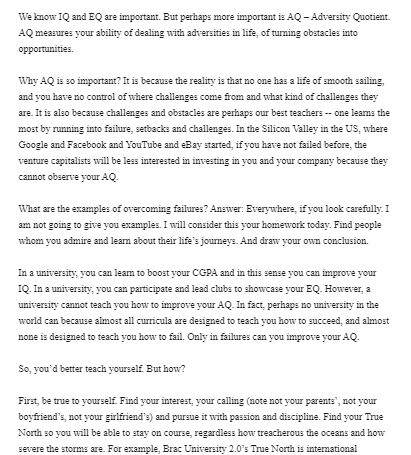 Posted by chris macrae at 11:50 AM No comments: